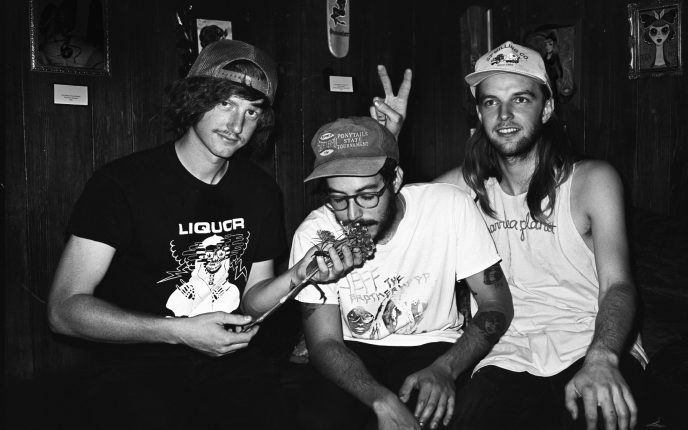 Music Band seeped out of a broken sewage line in an upstate New York dormitory, and somehow it’s Nashville’s problem now??? Brothers Harry (guitar), Duncan (bass) and Lee (drums) have been both room- and bandmates for over three years, and a single experience of seeing them on stage makes it obvious that they just can’t get rid of each other. After moving to Nashville, TN in 2011 they have been busy writing, recording and touring the United States. Since the release of “Satan’s Grave” (Denim Records, 2012) and their self-released “Live At Wembley” recording, the trio has most recently let loose “Can I Live”, a cassette on Nashville’s own Infinity Cat Recordings (Jeff the Brotherhood, Diarrhea Planet, etc.). Music Band’s demeanor in everything they do shouts their apparent mantra, “Always be nice, always try to look cool in pictures, and rock and roll forever.”

These dudes seem to have it all–save, perhaps, access to heaven–and they want to give it to everyone: tall tees, triple harmonies, dirt-thunder, trill beats, the bodies of wizards, big hearts, nice teeth, the patience of a demon, gravity, a very cool looking stone, big ole styrofoam cups, a thriving penchant for swamps, sacred talismans and, well, you get the idea. They are always laughing. Music Band wakes up laughing every day. Has that ever happened to you? It’s the best.

“If you’re going to be unfindable [on the Internet], you’d better be damn good. Which they are.”
-Noisey

“So come on now we gonna do this, honey. Just like we like to do. We all just out here turned up trying to live life to the most precious point.”
-Music Band