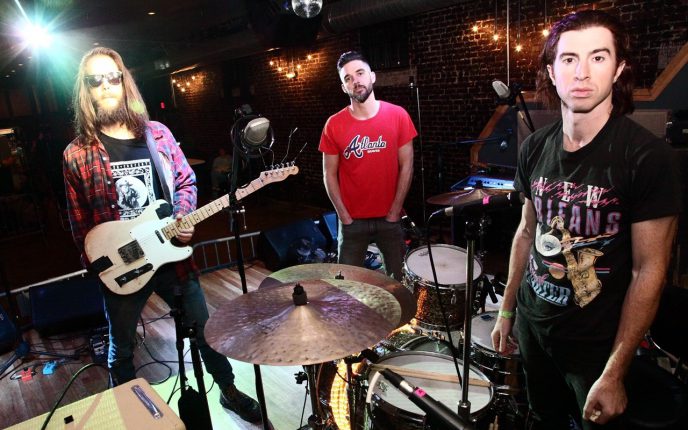 For their fifth album, the Athens-bred/Nashville-based power trio the Whigs wanted to find the exact midpoint between raw and rehearsed. After more than a decade together-during which they’ve released four critically lauded studio albums and toured constantly as either headliners or openers for the likes of the Drive-By Truckers, Kings of Leon, and MGMT-the three members all agreed that they wanted to flex their muscles a bit: write some good songs, get them down as tight as possible, hit , and tear shit up.

Says Parker Gispert (guitar/vocals): “We wanted to record quickly, and we wanted to record live. That meant we weren’t going to write a bunch of songs that relied on a horn line or any outside instrumentation. That guided the composition of the songs and informed how we approached recording them.”

For months the trio hammered these songs into shape at their Nashville practice space, united in a shared mission: to perform these songs with as much energy and excitement as possible, to expertly navigate every tricky tempo change, taut groove, spacy tangent, and ebullient hook. Their infamously raucous live show was never far from their minds. “Our practice space actually has about a foot-high stage,” says Julian Dorio (drums), “and we set up like we’re playing a show. We know we’re going to spend a lot of time on the road touring, so it’s always more fun to write something that’s going to sound exciting live.”

In the fall of 2013, the trio headed west to record with Jim Scott at his PLYRZ Studio in Valencia, California, about thirty miles northwest of Los Angeles. Scott has helmed albums by Tom Petty, Wilco, and Matthew Sweet, among many others, and his experience proved invaluable: “Guys like Jim have made hundreds of records and they’ve seen bands do the same stuff,” says Gispert. “He’s seen bands make mistakes and he’s seen bands capture some really great material. I felt very comfortable in his hands.”

Driven by Dorio’s pummeling drums and Gispert’s desperate vocals, the punchy “Asking Strangers for Directions” in particular benefitted from Scott’s input. Recalls Dorio: “We played it for him and he scratched his head and said, ‘Why don’t you take the second part and put it after the third part?’ It sent us for a loop. It felt backwards and upside-down, but we trusted Jim. We kept working on it, and now I can’t imagine it any other way.”

With Scott in their corner, the Whigs worked hard to make sure these songs didn’t sound worked over. Rather than track each instrument individually, the band captured most of the
songs in first or second takes, playing together live in the studio. Or, as the case may be, just outside the studio. Bypassing the studio proper, they set up shop in the hangout area at PLYRZ: a cavernous room where most artists spend their time eating, listening to records, goofing off, and just chilling out. For the Whigs, however, it became their creative headquarters.

“It has a real clubhouse vibe,” says Tim Deaux (bass). “Jim’s quite the collector of artwork and memorabilia. He’s got neon signs and weird posters and tied-dyed tapestries hanging on the walls. There’s a motorcycle in one corner, and there’s a Dolly Parton pinball machine.” In addition to amps, keyboards, and guitars galore, there is also an elaborate stereo system next to Scott’s sprawling vinyl collection-a veritable rock history at the Whigs’ fingertips.

And then there’s Scott himself, who acted the part of both producer and professor. He regaled the trio with industry war stories, and they soaked up everything. Recalls Gispert: “It’s an invaluable reference to work with someone who’s recorded artists that have influenced us. If we want to know how they got a particular sound, we can simply ask.”

PLYRZ proved inspirational for the Whigs, who channeled Scott’s experience as well as his catchall decorative scheme into wildly diverse rock songs that veer abruptly in unexpected directions and channel a dizzying range of influences-often in the same song. “She Is Everywhere” begins as an improbably spry pop-rock song, with a bouncy guitar jangle that evokes L.A.’s Paisley Underground. When the chorus comes around, the tempo slows precipitously and the song settles into a sludge-riff that recalls a time when “Iron Man” still walked the earth. Likewise, “Friday Night” mixes Motörhead momentum with one of the band’s catchiest pop hooks, while the martial stomp of “The Particular”-one of the album’s headiest and most hyperactive tracks-is punctuated by the band’s excitable shouts of “HEY!”

“I feel like we’re pulling from a big pool of influences,” says Gispert. “We’re drawing from different eras and different styles that we haven’t really explored on previous albums, and we’re trying to incorporate them into a sound that is still the Whigs.” Modern Creation is packed with playful allusions to rock’s past, yet the band isn’t playing to their record collection. Rather, these new songs digest a range of influences and spit them back out as something new, exciting, and idiosyncratic.

In other words, they’re working hard to show their range as a power trio, both in the studio and (when they hit the road this spring) on stage. That may be the secret to the Whigs’ longevity: Being a power trio means every member has to pull his own weight. “Nobody can lurk or hang back,” says Dorio.
“Everybody has to be contributing or else it’s going to fall completely flat. You can’t have a weak link. This is the rawest rock record we’ve made so far. It’s the truest representation of the band.”